Earlier this year, a group of researches claimed that fishing activities occurred in 55% of the world’s oceans [1]. As a result, their study found that the area fished is four times bigger than the area occupied by agriculture in terms of square kilometres. Europêche then argued that the study was based on scientifically unsound data [2], overestimating the proportion of the seabed where fishing occurs. A new scientific research developed by the Department of Marine Sciences and Fisheries of the University of Washington evidences this by showing that when low-resolution data are replaced by high-resolution data, the true footprint of fishing is revealed to be less than 4%. Science confirms that fishing continues to hold the first place as the lowest impact production method.

The original study led by the Global Fishing Watch gridded the ocean into large cells and counted every cell with any assumed fishing activity of any duration as fished, thus contributing its total area to the fishing footprint. The methodology used was based on a 15 year-old mapping capability which, according to scientists of the University of Washington, has become obsolete thanks to the precision allowed today by new technologies. Specifically, and according to the new research, the enormous difference lies in the fact that the first conclusion mapped the ocean "in a malicious way" using 0.5 ° latitude and longitude squares, which is equivalent to an extension of 3,100 km². The new study uses a much higher resolution (0.01 °, equivalent to 1.23 km²), closer to the actual movements of a fishing boat. As a result, the oceans' fishing footprint is reduced to less than 4%.

The researchers also argue that the low-resolution methodology ignored differences in catching power among vessels and gear, and disregards the scale of their direct or indirect impacts. Consequently, this leads to wrong estimates that cannot portray a representative view of the actual footprint of fishing nor the status of species nor the ecosystems affected by fishing. Europêche regrets that the study formulates invalid policy actions at global level all based on an inappropriate spatial scale of analysis that should not be taken into consideration by the international community.

Javier Garat, President of Europêche, commented that: “The effect of the larger grid resolution on the perception of fishing footprint is tremendous as it resulted in artificially magnified estimates. It can also imply that a trawling prohibited area is 100% trawled, while finer grid cells actually evidence how the legislation in place is completely respected by the fishermen” (as reflected in figure 1).

In addition, the original study compared the global fishing footprint with that of agriculture. However, researchers conducting the study considered the area where the targeted fish was found, and not the area actually swept by fishing gear, which was then compared to the area farmed or grazed by livestock. Within this context, the study consequently concluded that the effects of fishing are felt well beyond the actual tracks of fishing vessels, and larger than that of agriculture, simply because fish are extremely mobile. 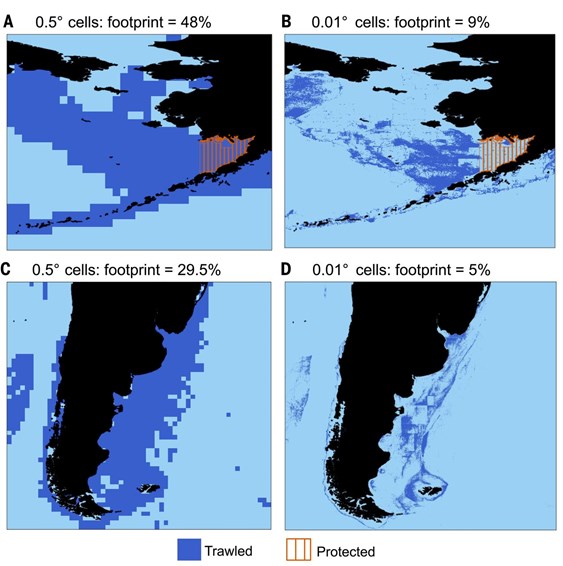 Bearing in mind that currently agriculture uses 38% of the world’s land and accounts for over 90% of freshwater use, Europêche stresses once again that this twisted comparison cannot be made since highly migratory species have nothing to do with enclosed livestock. As an example, tuna fishing has little or no impact on the marine seabed and solely affects the top predators’ abundance which recovers over time. Moreover, compared to other animal protein, wild-caught fish has a significantly lower carbon footprint due to the fact that it does not need to be artificially fed nor does it require the use of water supply. This is evidenced by a recent scientific study on the environmental costs of food [4], which concludes that the lowest impact forms of animal protein come from species that are fed naturally in the ocean and can be harvested with low fuel requirements. Fisheries footprint is less one third of that of agriculture around the world.

Mr Garat concluded: “Our message is clear, responsible fishing practices not only bring healthy seafood to our plates but also ensure a healthy and diverse marine environment. Science proofs one more time that the impact of fishing is negligible compared to other sources of food production.”