The title perfectly summarises the message unanimously given by governments during the Ministerial Conference on Fishing Vessel Safety and Illegal, Unreported and Unregulated (IUU) Fishing, organized by the International Maritime Organisation (IMO) and the Government of Spain in Torremolinos this week. The Conference aims to promote the widespread adoption of the Cape Town Agreement (CTA), a key IMO treaty for safety of fishing vessels, which so far has not entered into force due to low ratification levels1. Thanks to the recent accession of Spain and the boost provided by the Conference, nearly 50 countries signed a Declaration to enhance safety at sea by promoting the entry into force of the CTA and combating IUU fishing.

42 Years have passed since the first international Convention on the safe construction of fishing vessels was adopted in the very same place the Conference is held, Torremolinos. However, to date, there are no internationally binding rules on safe construction of fishing vessel. The IMO Conference appreciated the fact that the EU, already in 1997, implemented the Convention through a European law to harmonize the safety regime and that many Member States have adopted even more ambitious standards. However, it was reminded that it remains vital for European and third countries to become signatory parties to the CTA. This would not only allow the Convention to enter into force, but also globally increase safety standards, positively impact working conditions, welfare and well-being, assist in combatting IUU fishing and provide a level playing field for the industry.

Ment van der Zwan, Europêche spokesman on social affairs, participated in several IMO discussion panels focused on safety and working conditions. On behalf of the EU fishing industry, he declared: “Fishing is an occupation greatly exposed to safety risks. The protection of our fishermen in all aspects of their work must therefore be at the forefront of international efforts; the safety of our fishermen cannot be fragmented or limited by geographical borders”. He added: “Applying safety rules works and saves lives”. 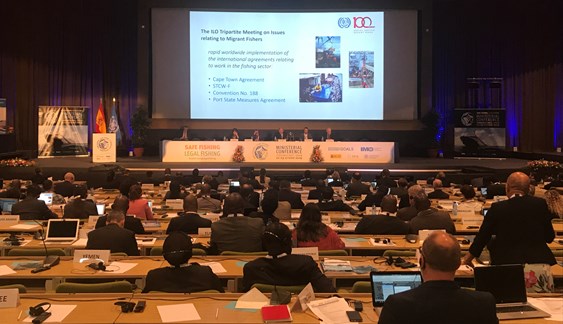 The IMO Conference Declaration2 states that a robust regulatory framework for the safety of fishing vessels and fishing vessel personnel could be achieved by the entry into force of the CTA together with the widespread ratification of the International Convention of Training, Certification and Watchkeeping for Fishing Vessel Personnel (1995 STCW-F). Europêche reminded that many countries have not yet ratified the STCW-F, including in Europe, and that the industry is currently working with European institutions to transpose this Convention into EU Law.

Commenting on the Declaration, Mr van der Zwan highlighted that governments have the responsibility under the Law of the Sea3 to ensure safety at sea. In this regard, he noted that while the Declaration lays down a promise to promote the entry into force of the CTA, most of the signatory countries have the statutory duty to implement internationally agreed safety standards, which is quite a stronger responsibility than just promoting them. For this purpose, he calls upon States to become parties to the CTA, Work in Fishing Convention C188 and STCW-F as a matter of urgency.

In order to keep the momentum on safety at sea, the European Social Partners in the fisheries sector4 organised in parallel a side-event covering, different aspects of work in the fisheries sector, aiming at producing guidelines on medical examination of fishermen, fair recruitment practices for migrant fishers, as well as safety on board. Particularly, the Social Partners are currently developing guidelines on recruitment of migrant fishers. 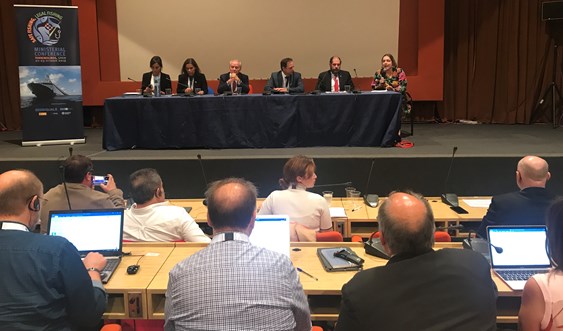 As part of the side-event, the Social Partners organised a high-level meeting with the Spanish administration and the International Labour Organization to promote the ratification of the Work in Fishing Convention C188. This landmark instrument is applicable to all types of fishing vessels and aims to ensure that all fishermen have decent working and living conditions, health and medical care at work. In view of the significance of the Spanish fleet and its widespread presence, the national authorities showed their commitment to ratify as part of Spain’s loyalty towards the international community to ensure sustainable ocean governance, transparency in employment relationships, and adequate control and inspection of vessels to prevent labour abuse and illegal fishing.

The Social Partners welcomed the good progress made by the Spanish national administration to transpose these standards into national legislation, the good inter-ministerial cooperation and the fact that the Government found no substantial obstacles to the ratification of the C188. Ment van der Zwan declared: “Spain's ratification would not only be an achievement for the Spanish fishing sector, but also a very significant step forward at global level. The ratification will certainly encourage other countries to follow”.

1 The Cape Town Agreement will come into force 12 months after the 22 country, 3,600 vessel threshold is reached. The contracting states that have acceded to the CTA are Belgium, the Congo, Denmark, France, Germany, Iceland, the Netherlands, Norway, Saint Kitts and Nevis, South Africa and Spain.

3 United Nations Convention on the Law of the Sea (UNCLOS), Article 94 dictates that: “Every State shall take such measures for ships flying its flag as are necessary to ensure safety at sea with regard, inter alia, to: (a) the construction, equipment and seaworthiness of ships; (b) the manning of ships, labour conditions and the training of crews, taking into account the applicable international instruments”. This flag State duty not only applies on the high seas but also in the country’s waters.