Seas and oceans are essential to human life in more ways than one might think. Since well before recorded history, humans have used the sea as a source of food, but a shift is occurring in modern times. Governments and new emerging industries are gradually looking at the seas as a source of minerals and energy, leading to a rough competition over maritime space. Namely, one of the human activities steadily growing its presence at sea is offshore wind farming, particularly in the North, Irish and Baltic seas. The fishing sector argues that this process is being developed without a careful analysis of the vast ecological and economic impact of such a use. In this ‘battle’, the fishing industry is losing valuable fishing grounds and access to healthy stocks. Europêche claims that EU’s climate and energy objectives are favoured, but not for the honourable reasons; why else putting the marine environment at risk and possibly changing the ecosystem faster than climate change could ever do?

In order to safeguard the future of our seas and oceans, the EU adopted back in 2014 a Directive for maritime and coastal spatial planning urging Member States to ensure that human activities at sea take place in an efficient, safe and sustainable way and reduce users’ conflicts. At the same time, to tackle climate change, EU governments are determined to answer to the EU’s Paris Agreement nationally determined contribution[1]. For this purpose, some countries are pushing to increase offshore wind power 40-fold by 2030 in Europe.

Europêche argues that the fishing sector has invested many efforts to take care of the marine ecosystem by mapping and carefully assessing any impact before even starting any fish operation. However, this so-called precautionary approach does not seem to apply when it comes to the construction of offshore wind farms. Despite estimated huge environmental effects on sea life as currents, salt levels, fish migration patterns, and algae growth, the planned expansion process cannot go fast enough. Europêche emphasizes on the absolute necessity of conducting thorough ecological and economic impact assessments before authorising any construction of offshore wind farms as would be the case for any other sector operating in the marine environment.

Daniel Voces, Managing Director of Europêche, stated: “The environmental and economic costs of offshore wind energy are greater than one can expect. A large amount of square kilometers is needed for this industry, which translates into habitat destruction and a direct loss of fishing grounds due to the prohibition of fishing in the wind farms itself but also in the surrounding large buffer zones. The same grounds where fishermen were solely making use of the sea’s resources in the most sustainable way possible are now used and subsidized by governments to build offshore wind farms. As a consequence, fishermen are forced to displace from these areas and concentrate fishing effort in the already limited space left, increasing safety risks.”

The fishing sector believes that the closure of marine areas, especially important fishing grounds, to make place for harmful maritime constructions in order to answer to the energy and climate goals, is unthinkable. In many occasions, vulnerable marine areas are being closed for fishing, while at the same time kept open to high-impact industries such as for oil and gas companies. Europêche highlights to have no objection against other economic activities taking place in European waters. However, the EU must ensure that high environmental, social and safety standards are upheld for all industries. Otherwise such bypassing of standards not only threatens the sustainable management of our seas and oceans but also directly endangers the contribution to the food security of the growing global population.

Mr Voces continued: “If Europe really wants to protect marine ecosystems from external threats, this unequal treatment towards marine uses cannot continue. The fishing sector should not be discriminated against other economic activities, whose environmental and socio-economic impact is yet unknown in the long term. Furthermore, we call for well thought through and informed consultations with European fishermen as an integral part of this process before authorising the construction of new wind farms, considering that they are the maritime users to be adversely affected.”

Europêche emphasizes that thanks to the fishing industry’s low carbon footprint and the little impact on marine biomass, seafood is the best option in terms of food security to fight climate change. The sector therefore calls upon the European Commission to acknowledge and prioritise the fishing sector as a key user of marine space in view of being first and foremost a high-quality and low impact animal protein provider.

[1] The EU’s nationally determined contribution (NDC) under the Paris Agreement is to reduce greenhouse gas emissions by at least 40% by 2030 compared to 1990, under its wider 2030 climate and energy framework. 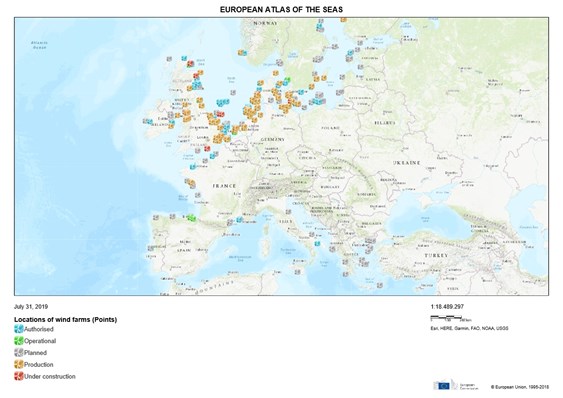