An unfavourable judicial decision would bring about serious consequences for the relations between Europe and Morocco beyond the fishing interests and would undermine the socio-economic benefits yielded thanks to the good relations between both parties.

The Joint EU-Morocco Commission of Fishing Professionals, which formalised its constitution last Friday in Dakhla (Morocco), has warned of the negative socio-economic impacts for both parties of an unfavourable decision of the Court of Justice of the European Union (CJEU) in relation to the current fishing protocol between the European Union and the Kingdom of Morocco. This agreement is in force since July 2014 and will expire on 14 July 2018. The CJEU is expected to issue its final ruling on 27 February this year.

The Mixed Commission met in Dakhla and from the European side counted with the participation of representatives of the fishing sector from Spain, the Netherlands, Germany, France, Poland and Lithuania. The EU industry underlined that the current EU-Morocco fishing agreement not only guarantees respect for international law and human rights, but has been beneficial to both parties, and asks the CJEU to be consistent.

Likewise, the Mixed Commission emphasised that a negative court ruling would create serious consequences for the relations between Europe and Morocco beyond the fishing interests. According to the Mixed Commission an unfavourable resolution would only serve to undermine the social impact resulted from the good relations between the Kingdom and Europe, as well as the economic development that goes with it, as the members of the Joint Commission have seen "in situ", in the city of Dakhla.

In this regard, the Mixed Commission recalls that the fisheries agreement (which sets the legal framework for the implementing protocol) entered into force in February 2007, one year before Morocco's accession to the Advanced Statute. This Statute sets, among other objectives, the revitalisation of fisheries management under a framework of joint cooperation, which has allowed the European Commission to continuously monitor the application of the protocol and an ex-post assessment report which confirms its strict application.

According to this report, each euro invested by the EU within the framework of the protocol, generates €2.78 of added value for the EU fishing sector. As the Mixed Commission has highlighted, it is also highly beneficial for the Moroccan fishing sector. This sector generates 2% of the Moroccan GDP, with fisheries products representing 9% of its exports.

The representatives of the Mixed Commission clarified that beyond the economic benefits the agreement is also positive from a social and environmental point of view, particularly in view of its direct influence on the development, both of infrastructures (ports, processing, storage and transport), as well as scientific and technological activities aimed at guaranteeing the sustainability of the fishing resources of one of the healthiest and most productive fishing grounds on the planet.

According to Javier Garat, President of Europêche, and co-chairman of the EU-Morocco Mixed Commission of Fisheries Professionals: "This agreement has proven to be effective for the sustainable exploitation of fishery resources, it is vital for the activity of up to 126 European vessels and, quite contrary to what certain pressure groups with clear political interests wield, is clearly beneficial for the socio-economic development of the population of the different provinces of Morocco."

Mr Akouri, president of the Fisheries and Aquaculture Maritime Federation of Morocco and co-president of the Mixed Commission, added: "The EU Attorney-General is not aware of the damage that an unfavourable decision can signify for the good relations that Morocco and the EU have built over many years. A negative judicial decision would create a paradox for Europe and would seriously damage the social fabric of the southern regions of Morocco, which is precisely what the denunciation of the agreement defends." 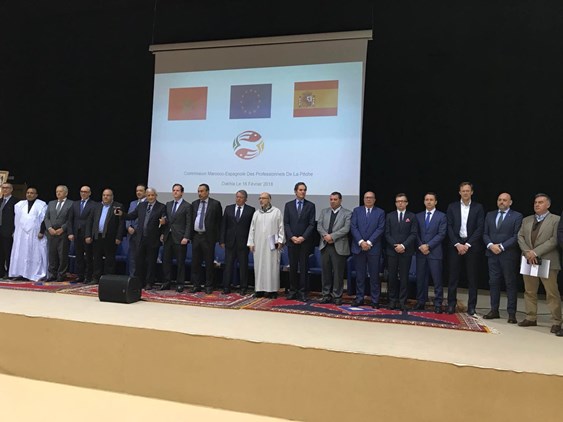 The current protocol (2014-2018) of the EU-Morocco fishing agreement allows fishing on the Moroccan fishing ground to a maximum of 126 fishing boats from the EU. In Morocco, the agreement has generated over 700 direct jobs for crewmembers (being 200 of them Moroccan fishermen working on EU vessels), and around 3,500 jobs ashore. It should be reminded that, in these regions, fishing accounts for 40,000 jobs in terms of direct and indirect employment.

The EU economic contribution amounts to €30 million per year, of which €16 million corresponds to fishing access rights and €14 million to sectoral support which aims to promote sustainable fisheries development in the partner country of Morocco. On top of this there is as well the contribution of the ship-owners in terms of license fees which amounts to €10 million.

In addition, 66% of the EU financial envelope for sectoral support (€9.24 million) has been allocated to the Moroccan administrative regions of southern Dakhla-Oued Eddahab and Laâyoune-Sakia-El Hamra, respectively; including, for example, the new Dakhla fish auction, with an investment of €2.7 million.

Furthermore, this mixed agreement contains access to different species: small pelagic species, demersal species and highly migratory species. Concerning the total catches European vessels fish 83,000 tonnes per year, representing 5.6% of the total catches in the area, worth €80 million. The catches of Spain under this agreement represent an average of 7% (7,314 tons) of different species. The rest of the European countries using the protocol, fish around 75,686 tonnes (93%) of small pelagic fish with mainly sardine, mackerel and horse mackerel.

As for the Moroccan fleet the country counts 20,000 vessels which fish 87.9% of the total catches in its waters and the remaining 6.5% is caught by Russian ships. It should be noted that Morocco also has agreed to a fisheries agreement with Russia for small pelagic species, renegotiated in 2016, as well as with Japan, for the access of tuna long liners.