Last week, the European Scientific, Technical and Economic Committee for Fisheries (STECF) published its annual report on the performance of the Common Fisheries Policy (CFP) concerning the progress on the situation of the fish stocks and exploitation levels. The report concludes that stocks status has significantly improved although the rate of progress has slowed in the last few years. It also reflects an overall downward trend in the fishing pressure over the period 2003-2015 in the North-East Atlantic. As a consequence, the biomass has been generally increasing since 2006, and was in 2016 on average around 39% higher than in 2003. However, further efforts are still needed, particularly in the Mediterranean.

The STECF report [1] evidences positive trends in many fish stocks across Europe. This is clearly demonstrated by the fact that in the North East Atlantic the proportion of overexploited stocks decreased by 37% in a ten-year period. The proportion of stocks outside safe biological limits follows the same progression, namely a decrease by half during the same period.

The good news in these waters does not end here, the recruitment trend relative to 2003 shows that the number of young individuals entering the fishery is consistently increasing. The same goes for the biomass, which in 2016 was on average around 39% higher than in 2003.

President of Europêche, Javier Garat, declared: “We welcome the fact that the number of stocks at sustainable levels is growing year after year. To be more precise, 53 stocks are being fished at Maximum Sustainable Yield (MSY) levels this year, compared to only 5 in 2009. For the majority of the stocks in the North East Atlantic, the end of overfishing has become a reality and is now backed up by science. Policy-makers, however, should not be fixated on the number of stocks fished at MSY levels since the stocks already at sustainable levels represent the vast majority of catches in Europe. This is even more true in light of the growing stock abundance and the better economic performance of our fishermen.”

Now that we have reached MSY levels for many stocks, the new challenge is to overcome the single-stock-management difficulties particularly for mixed-fisheries, argued the fishing body. In so many cases it is obvious that the interactions among the stocks (e.g. predator-prey-relationships or competition for food resources) become more important for the status of the fish populations and make it evidently extremely difficult or even impossible to reach MSY levels for all stocks simultaneously in the same area.

As far as the Mediterranean is concerned, Garat concluded: “While acknowledging the delicate state of the stocks, the fishing sector truly hopes that all the measures put in place by the EU and governments serve as a turning point of the situation and starts to bear fruit soon. We hope that the successful bluefin tuna story can be repeated for many other stocks in the region.”

* The STECF graphs below illustrate the significant reduction of fishing pressure (F/FMSY), increase of biomass (B/B2003) and recruitment (R/R2003). 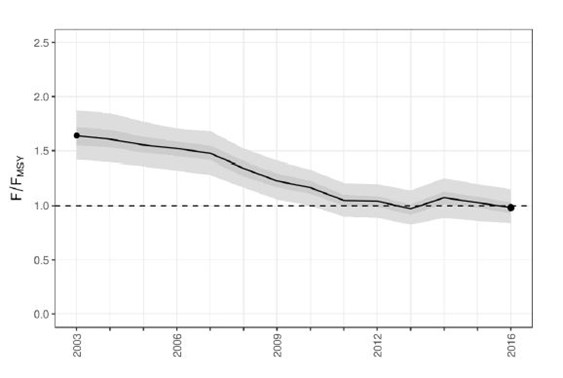 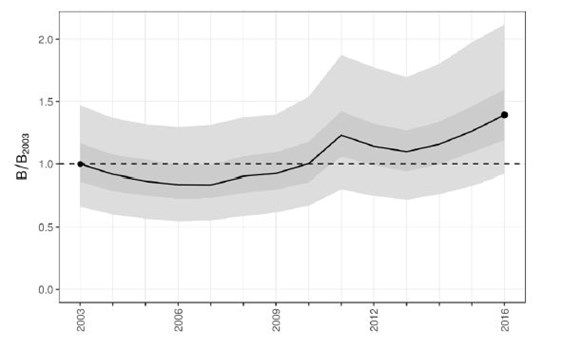 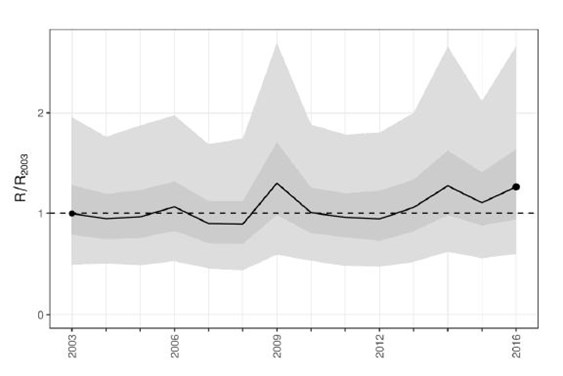