The President of Europêche, Mr Javier Garat, participated in a Public Hearing in the European Parliament (EP) organised by the Group of the Progressive Alliance of Socialists and Democrats (S&D) on the EMFF. EU institution representatives and stakeholders examined the degree of utilisation of resources, the effectiveness and efficiency of the financial measures and budgetary prospects for post-2020. Mr Garat expressed concern over the current state of play of the fund and called for a change on the future EMFF.

According to Garat, the reasons for the standstill in the allocation of the economic resources lay in the delay of the adoption of the EMFF Regulation itself; the excessive time taken by the EU Member States to prepare the national operational programmes[1]; and, finally, the excessive bureaucratic obstacles encountered by intermediate management bodies. ‘In short,’ Garat stated, ‘there is too much red tape, too many controls and a lot of fear from governments of making mistakes that may lead to the withdrawal of these funds. This means that the sector is not receiving funds on time or in sufficient quantity to be able to develop the necessary projects to make fisheries more sustainable and profitable. Simplification is of the essence‘.

With regard to the next EMFF post-2020, Garat presented several proposals and recommendations to improve the allocation and design of the future fund. In the first place, he called for a specific fisheries fund, with a larger budgetary allocation, which should incorporate flexible financing mechanisms. He also called for the operational programmes to make the mechanisms for financing both direct aid and financial instruments more flexible (loans, endorsements, guarantees, etc...).

Garat also stressed the need to adopt a substantial financial envelope to finance both small and large projects. The latter can refer to major research projects such as those necessary to improve the selectivity of fishing gears in order to be able to adapt to the landing obligation.

Additionally, Garat highlighted the need to finance temporary cessations of fishing activities caused by extraordinary circumstances such as biological standstill, closure of a fishery or breach of a fishing protocol with a third country.

Moreover, Garat argued that the EMFF should encourage industry collaboration with scientists, enhance innovation and technological development and promote collaboration between fishing companies and the ancillary industries surrounding them (communications, control, species detection, selectivity, energy efficiency, etc...). In fact, Garat pointed out that the ancillary companies should also be able to benefit from aid to promote the development of innovation projects, stating that "the European Parliament should support the concept of industry 4.0, incorporating ICT (information and communication technologies) into production processes".

Europêche, as representative of the employers in the EU fisheries sector, also considers it vital that the new EMFF post-2020 takes account of the social dimension; i.e. promoting the social dialogue, safety and well-being of crews through good working conditions (in line with ILO Convention 188) and training, to alleviate the current problem of shortage of qualified professionals. 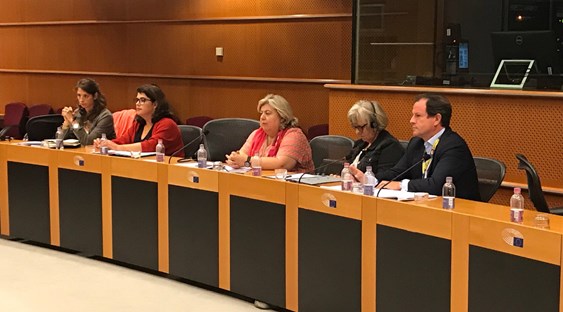 During his intervention, Garat also called for the continuation of the aid for permanent cessation in cases where these measures are necessary to balance fishing capacity with available resources. It was reminded, that between 2007 and 2015, the capacity of the EU fishing fleet decreased by 17.5% (in gross tonnage), of which more than half was removed with support from the previous EU Fund. Conversely, and in the cases of balanced fleets, such as those targeting species at Maximum Sustainable Yield (MSY) levels, Garat considers that a strategy for the renewal and modernization of EU vessels is recommended (the average age of the EU fleet being 22.6 years old).

Furthermore, according to the President of Europêche, full support must be given to the Production and Marketing Plans (P&MPs) which allow the collective and tailor-made management of producers' activities, as well as to the actions performed by the Fisheries Local Action Groups (FLAGs), to promote the diversification and development of coastal areas highly dependent on fisheries.

Finally, Europêche also requested that the EMFF provides aid to improve data collection and control of the entire fisheries value chain, as well as providing mechanisms to inform society about the reality of fishing.