The control rule on margin of tolerance is currently incompatible with the conditions and specificities inherent to the fishing operations in the tropical tuna purse seine fishery. Crushed by heavy sanctions, EU tuna vessels operating in the Indian and Atlantic Oceans might disappear in the very near future.

ANABAC, OPAGAC and ORTHONGEL, representing the European distant-water fleet fishing tropical tunas, have warned EU institutions for several month about the impossibility for them to comply with the control regulation on margin of tolerance. This rule imposes that there is a difference of no more than 10% per species between the estimates on board and the actual landed catches.

The sector argues that operating under temperatures above 30°C, skippers only have a few minutes to sort and freeze their catches before the apparition of histamine in the tuna, which makes fish unfit for human consumption. Furthermore, similar target tuna species cannot easily be distinguished from each other in such a short time. Technological solutions are currently being studied by the fleet but will take several years to develop.

Anne-France Mattlet, Europêche Tuna Group Director, stated: “That’s why tropical tuna fleet requests to be able to apply this 10% margin of tolerance not per species but of the whole catch on board. While the European Parliament has adopted a position that takes into account the specificities of the fishing operations in the purse seine fishery, the European Commission refuses to bring any flexibility to the rule. As a consequence, ships and skippers are being sanctioned again and again, accumulating points on their licences. This will unequivocally lead to the suspension of the fishing licences and the immobilization of EU vessels. On the meanwhile, non-EU vessels will keep fishing since they are not subject to the same control, environmental, health and social rules. Some non-EU countries do not even apply the catch limits decided at international level.”

ORTHONGEL, representing the French tuna purse seine fleet, commissioned the Rinzen firm, specialized in independent economic analysis, to evaluate the socio-economic consequences of those sanctions. The verdict is inambiguous: if nothing changes, by 2026, the weight of the sanctions on the turn-over will be so unbearable that ship-owners and 1,600 jobs can simply disappear. Ms Mattlet concluded “the situation might be even worse since the study does not consider the increasing costs of fuel nor the deficit accumulated during COVID. Even during these crisis periods EU tuna vessels kept fishing without being able to generate profit to supply canning factories and maintain employment.”

Those conclusions are equally valid for the Spanish fleet. The jobs of over 2,500 fishers are hanging on by a thread since Spain is currently applying heavy sanctions that are forcing many of their units to stop for over 2 months in port. This is a direct effect of the impossibility for the EU tropical tuna distant water fleet to apply this rule. The Europêche Tuna Group is firmly asking to have a 10% margin of tolerance for the whole catch, at least until technology can solve the complicated sorting of tropical tunas by species. 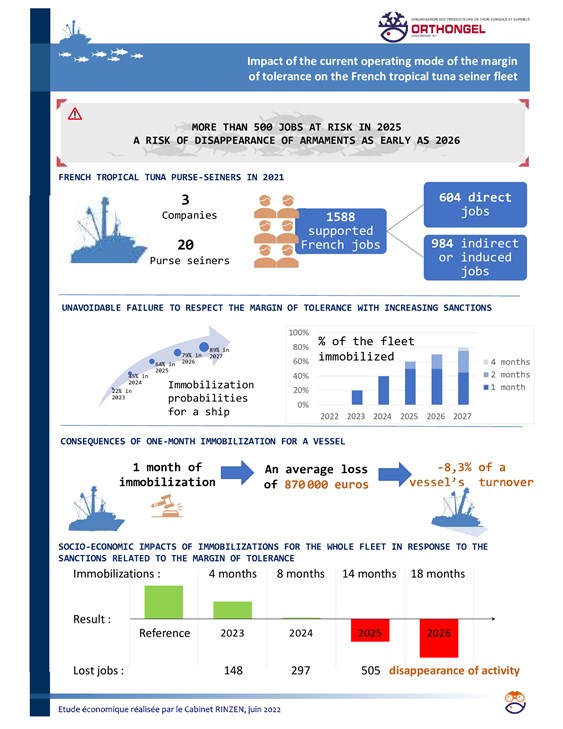