Speaking from the meeting, President of Europêche, Javier Garat, welcomed the positive attitude and constructive nature of the dialogue; 'I am very pleased that Commissioner Vella is actively engaging with the fishing sector and has shown a great willingness to continue this open door policy into the future."

Garat, continued: "Our fishermen have made a concerted effort to reduce pressure on stocks and cooperate more closely with scientists and as we have heard from ICES, we are seeing the positive results. In the North-east Atlantic we witnessed a decline in the number of ‘overfished’ stocks well before Maximum Sustainable Yield (MSY) targets were in put in place and now have 36 stocks fished at this level." 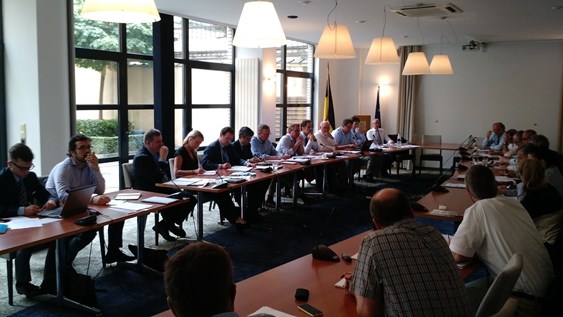 Commissioner Vella pointed out the need to work with the sector to ensure we have economic sustainability as well as environmental: "We don't want to kill the fishermen to save the fish. We need to give credit to the fishermen who made the sacrifices to achieve the objectives are witnessing today. We cannot lose momentum". Members underlined the importance of the social dimension of fisheries and welcomed the participation of the Commissioner at a future social dialogue committee meeting, where Europêche is a social partner. The Commissioner also highlighted the dangers of marine litter and how Europêche's collaboration with Waste Free Oceans was an important step in the ocean clean-up.

Among other topics discussed, Europêche members commented on the importance of the Commission taking into account all type of fleets and gears, both small and large. All of them play their role in providing healthy food to the consumers and creating employment and wealth in fishing dependent areas. Management plans were also on the agenda with the sector representatives emphasising the point that we can only regulate based on fishing effort (Fmsy) as stated in the CFP reform, but stock size (Bmsy) depends on a whole host of natural factor that are out of control.

In addition, the Commission stated that MSFD targets must be fully consistent with the CFP objectives in order not to rewrite a new policy framework. Moreover, given the good status of many EU stocks and sufficient raw material to supply our markets, members of Europeche expressed the need to eliminate the tariff duty of 0% particularly for imports of tuna loins and flatfish since it only serves to lower the price of the final product. If that is not the case, the tariff exemption should be granted on a bi-annual basis to avoid market distortions.

The situation in the Mediterranean was also discussed with the Commissioner pointing out that bluefin tuna is a good example that when we have solid scientific data and willingness from all Members States to take action, we can yield good results. However, regarding other stocks in this area, both parties called for a concerted effort to repeat the success stories of northern waters. In this way, Europeche proposed to hold a workshop within the Mediterranean Advisory Council to provide an adequate forum for scientific presentations explaining in detail the status of stocks and to discuss possible measures to improve fisheries management in the Mediterranean. The Commissioner also agreed that Europêche has an important role to play in the fight against illegal, unreported and unregulated (IUU) fishing which represents 3 times what is caught in EU waters.

The meeting coincided with Europêche welcoming their latest member, the Shetland Fishermen's Association and a new collaboration established with Fisheries Iceland in the framework of the Social Dialogue Committee to address global health, safety, working and living conditions for our fishermen. The increasing membership and cooperation represent a positive step for the European fishing sector and a stronger voice for the fishermen.

Currently, Europêche consists of 13 national organizations of fishing enterprises from 9 EU Member states. On this day the Association took on board the membership application by the « SFA, Shetland Fishermen’s Association», consisting of 80 vessels.