Mr Karmenu Vella, Commissioner for Environment, Maritime Affairs and Fisheries, met yesterday with a Europêche delegation representing the long distance fishing fleet in Europe. Both Commissioner Vella and Europêche valued positively the major improvements made in the external dimension of the Common Fisheries Policy (CFP), which positions the EU distant-water fishing fleets at the forefront of the world's sustainable fisheries. The sector recalled the importance of adopting more fisheries agreements with 3rd countries which must be linked to trade and regional policies. Europêche requested further diplomatic pressure on Norway on the issue of snow crabbing and other important fish stocks in the Barents Sea and Svalbard waters.

Both Commissioner Vella and Europêche members agreed that sustainable fisheries partnership agreements (SFPAs) are the most transparent and mutually beneficial fisheries agreements in the world. For this purpose, the sector requested diplomatic support at the highest level to renew the agreement with Guinea-Bissau on fair terms. Europêche also asked the Commissioner to make every effort to renew the agreements with Morocco and Gabon.

The fishing body also called for the reactivation of the so-called "dormant agreements"[1], such as Gambia and Equatorial Guinea. These agreements have not been operational for more than 20 years and, due to the exclusivity clause, are paradoxically not only preventing EU companies to fish in these waters but also to conclude other private agreements.

The EU fishing sector stressed the need to establish a coherent network of SFPAs to secure fishing access to highly-migratory species as well as to link these agreements’ negotiations to regional management policies. The latter would help strengthening sustainable governance in all oceans. 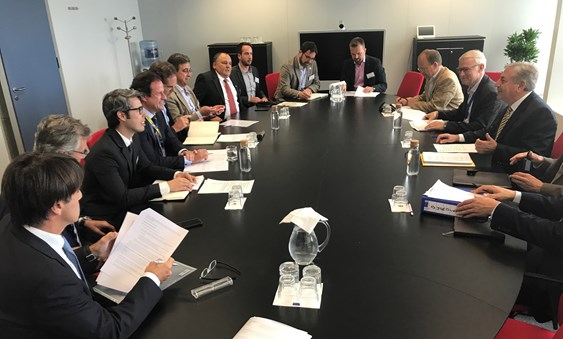 Regarding the new Regulation on the sustainable management of external fishing fleets, which is expected to enter into force in early 2018, Europêche has asked Vella for support in order to comply with the new requirement to provide a scientific evaluation demonstrating the surplus of resources in third country’s waters where private agreements exist. In particular, Europêche requested to help African countries to build the capacity to carry out the necessary scientific stocks assessments.

Europêche members also reiterated their support for EU policies and actions in the fight against IUU fishing. In line with the Long Distance Advisory Council advice, Europêche requested the mandatory inclusion of the IMO number in the catch certificates for imports of fisheries products for third country’s fleets to guarantee an international level playing field and combat fraud. The sector encouraged the European Commission (EC) to adapt market access rules according to the standards adopted for the EU fleet.

With regard to bluefin tuna, Europêche hopes that the ICCAT Scientific Committee will finally recognise the full recovery of the species and that the EC can defend a substantial increase in the Total Allowable Catches (TAC) at the meeting in November.

Europêche also stressed the importance of relations between the EU and Norway, however recalled the importance of defending the rights of Member States in Svalbard. The situation stills remains unbalanced and overly favourable to Norway to the detriment of the EU fishing fleet, not only on issue of snow crab, but also related to other important fish stocks such as Greenland halibut, redfish and haddock.

Javier Garat, President of Europêche, declared: ‘The maintenance of current SFPAs and the search for new fishing opportunities in non EU-waters must be a priority objective of the EU external fishing policy. When the EU fleet ceases to operate in the fisheries of a third country, such fishing opportunities are reallocated to other fleets that have much lower standards of conservation, management and sustainability than those advocated and defended by the EU. The long-distance fleets will continue playing a leading role in providing food security, since they catch around 28% of the EU’s total catch for human consumption.’

[1] "Dormant agreements" refer to countries who adopted a SFPA without having an implementing Protocol into force.